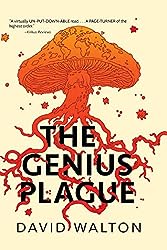 You don’t often see tense, page-turner science fiction with fungus as a starring role, but The Genius Plague by David Walton pulls it off.

One brother gets his dream job as an NSA codebreaker as the other brother (a mycologist) jets off to South America. He comes back with a near-lethal fungal infection and a gap in his memory. Once he recovers, he’s significantly smarter. Then people around him undergo the same transformation and seem to have a similar, secret goal. It’s up to the NSA newbie to figure out what’s going on.

The Genius Plague is only disappointing in that it’s so close to being amazing. The characters are good, if not great, the pacing is solid if not pitch-perfect.

Recommendation: Read it! This is a fun, hard-to-put-down book, and I’m looking forward to checking out other books by David Walton.