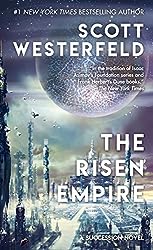 The Risen Empire has some interesting ideas about the far future. Humanity has split into several factions, one of the largest is the Risen Empire, ruled by a single, immortal emperor for sixteen hundred years. This emperor has the sole power to bestow immortality on any of his subjects. When the emperor’s home planet is attacked and his sister held hostage, military and political gears start turning.

Unfortunately, shallow characters, a jumbled story structure, and a deeply unsatisfying ending killed this book for me.

Recommendation: Pass. There are the bones of a good story in here, but this book needed serious editing.

One thought on “Review: The Risen Empire by Scott Westerfeld”