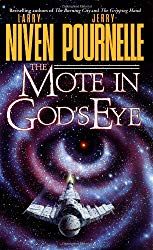 Nominated for a Hugo, Nebula, and Locus awards in 1975, The Mote in God’s Eye has not aged particularly well. There are some clever twists and exciting sequences in this far-future first-contact tale, and the alien Motes are, in some ways, truly alien.

However, many characters are similar to each other and hard to differentiate, except for the single female character, who is treated more as a girl than a woman. The story doesn’t really kick into gear until about halfway through, after over 200 pages.

Recommendation: Skip it, unless you’re a big fan of authors Larry Niven and Jerry Pournelle. There’s better first-contact stuff out there for a modern reader.

8 thoughts on “Review: The Mote in God’s Eye by Larry Niven and Jerry Pournelle”