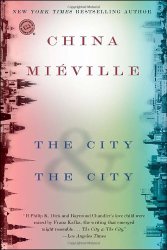 The City & The City is a noirish crime novel with some wonderfully inventive world-building, but its flat, wooden characters kept me from ever connecting with the story.

What makes The City & The City unique is its location: two cities that somehow exist in the same physical space. Residents of each city are trained from childhood to “unsee” any buildings or people in the other city. Failure to do so results in being spirited away, often permanently, by Breach, a secret police that may or may not be human. The details of how people live in this bizarre situation are clever and fun to read.

However, the flat characters kills the book for me. None of them ever came off the page or gave me a way to identify with them.

Apparently, I’m just not a fan of Miéville’s writing. I read his fantasy book Kraken and had the same reaction: great, creative world-building, with hollow, uninteresting characters.

I’m in the minority in not enjoying The City & The City. It was chosen as one of the best books of the year by The Los Angeles Times, The Seattle Times, and Publishers Weekly.

Recommendation: Pass. If you’re in the mood for science fiction and noir crime, check out Gun, with Occasional Music instead.