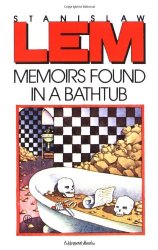 If, before sitting down to write 1984, George Orwell had decided to candy-flip (ingest LSD and ecstasy simultaneously), he might have ended up with something like Memoirs Found in a Bathtub.

It’s an absurd, bizarrely complex satire on the overbearing bureaucracy and paranoia of the modern world. Written in 1961, it’s still relevant. If you’ve spent any time in a government office recently, Memoirs‘ ridiculousness will feel distressingly familiar.

The unnamed protagonist, who lives inside a giant windowless building inside a mountain along with everyone else he’s ever met, is given a Special Mission against the enemy. He’s not precisely sure who the enemy is, or even if they actually exist. He spends the entire book meeting daffy, unhelpful characters while trying to figure out what his instructions actually are.

Recommendation: Get it at the library. It’s weird, fun, and different, but the societal issues it lampoons are so depressing that I don’t want to be reminded of them every time I see the book on my shelf.