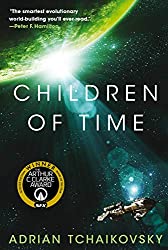 The idea was to terraform a world to prepare it for human life (check, done), send in a supervirus that makes some creatures really smart (check, also done), and finally, land some Earth monkeys on it and watch them get really smart and do amazing things (whoops, nope, total disaster).

Many years later, a spaceship filled with the last humans fleeing a dying Earth arrives to the planet. The humans have been told the planet has been prepped for them, but there’s a whole alien civilization down there, and it’s not what anyone was ready for.

Children of Time is clever, fast-paced, and wildly entertaining. I had a great time reading it.

2 thoughts on “Review: Children of Time by Adrian Tchaikovsky”