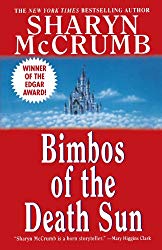 Bimbos of the Death Sun is a clever, funny murder mystery that takes place during a science fiction/fantasy convention. So it’s not really a science fiction book, but I think most SF readers would enjoy it, given the large number of SF references. It features no actual bimbos.

The main character is a brand new author who wrote a book called Bimbos of the Death Sun, and this is his first convention. He meets the world-famous author Appin Dungannon, a deeply despicable person who hates his own books almost as much as he hates his fans. He ends up murdered, and despite the fact that the world is immediately better off for his absence, the new author tries to figure out who the murderer is, all while navigating roaming groups of cosplayers and panicking convention organizers.

Recommendation: Buy it. It’s short, fun, and there’s no way your local library has this.